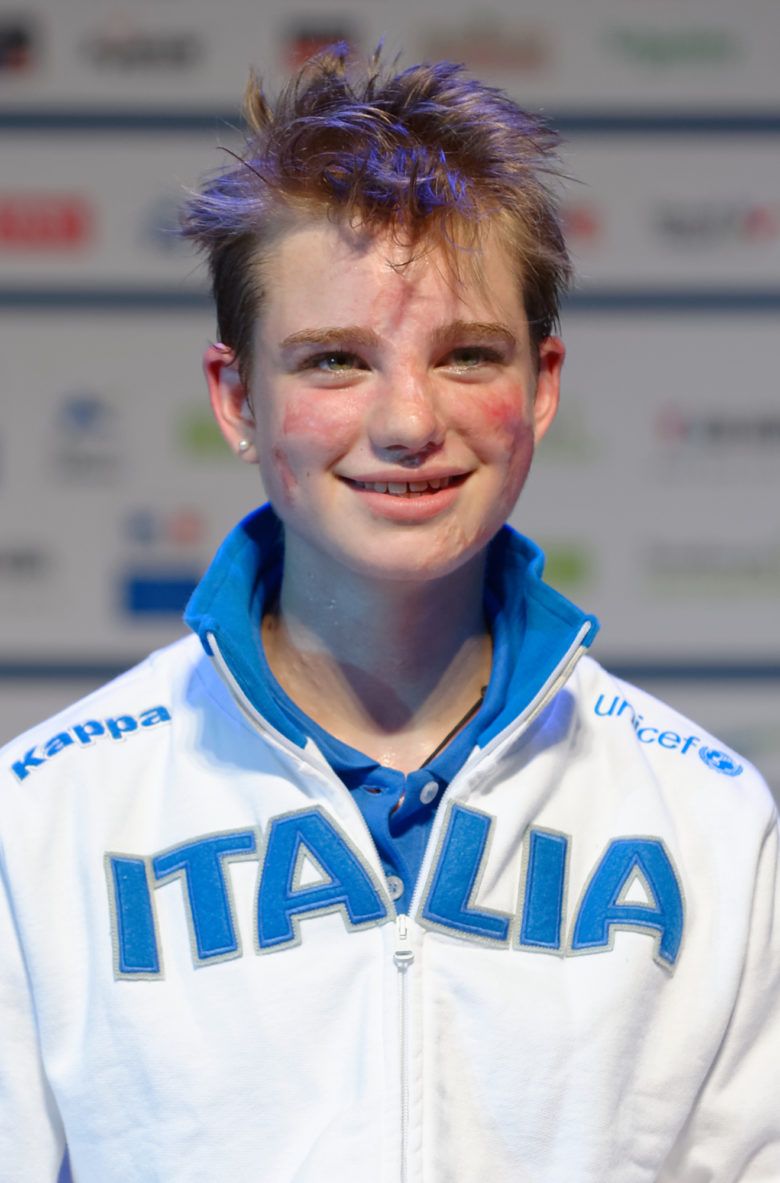 Beatrice Vio, nicknamed Bebe by all, gets passionate and approaches the fencing in 2002 when she’s just 5 years-old; she was born on March 4, 1997 in Venice.

In 2008 she accuses several days of headache and fever and for this reason get’s hospitalized; Inpatient at the pediatric intensive care unit of the hospital of Padua sh gets diagnosed with group C meningococcal meningites, her condition worsens.

This form of meningitis is particularly aggressive and rapid, so much so that Bebe fights for his life for days. Being the victim of necrosis and widespread infections, the doctors first decided to amputate her legs (under the knees) and subsequently also required the amputation of the forearms.

A long and complicated path sees Bebe fighting in the hospital for more than six months, including plastic surgery and resuscitation; this disease leaves evident traces on her body, in fact there are many scars that cover the body of the young Vio.

After a few months of treatment Bebe immediately returns to her life: friends, school and above all fencing; thus the young girl undertakes a new fight: fencing in wheelchairs, specializing in the Fioretto (Cat. B), thanks to a special prosthesis designed to support the foil itself, and her family’s need to give voice to social integration through the sporting activity for children who have undergone amputations. In 2009, in fact, the ON association was born. Bebe’s official debut as a Paralympic fencing was in Bologna, May 2010 and only a year later she became Italian Under-20 champion, confirming the result durng the following two years becoming the Italian Absolute Champion.

In June 2014 at the European Championships in Strasbourg, she won gold in the B category both individual and as team pitch and in September of the same year she won another gold at Warsaw U-17 World Championships.

In 2015 Bebe won the gold medal at the Eger World Championships in the individual foil, and in 2016 won the European title at the Casale Monferrato European Championships.

The most incredible results came just that year when at the XV Paralympic Games in Rio de Janeiro where she won the gold medal of the individual test against the Chinese Zhou Jingjing for 15-7.

On 16 September 2016 she won the bronze medal in the team test, along with her companions Loredana Trigilia and Andreea Mogos, at the end of the closed final won for 45-44 against Hong Kong.LUS Art4sport.

Her story was narrated in a documentary presented for the International Day for the Rights of Persons with Disabilities, on December 3rd which begins like this: «Beatrice started fencing on her feet when she was 5 years old». Now she still does. She puts on the mask and enters her world. “The mask is small, but contains everything inside. My family. My friends. My team. You realize you do not fence for yourself. You fence for everyone “.

Beatrice Vio’s vsion is all in this sentence that says it for short, premiered at DOC NYC, in the section The future is female. “Physically I’m thin and I miss all the pieces. My strength is to be able not to think about how I am physically and instead obtain the top from what body I have left ».